It is impossible to ignore the thousands of airbrushed to perfection celebrity images we get bombarded with daily. As we try and survive winter in our onesies; surely we have earned a reprieve from seeing pictures of Victoria’s Secret models frolicking in St Barts? Well, I’m sorry to have to break this to you, but that’s not going to happen.

It is always summer somewhere in the world and this means constant, year-round pictures, of beach-ready babes distracting us from our hot chocolates. If you pull your eyes from the washboard abs of the latest IT girl and start reading the actual article it can send you into a tailspin. You experience a mind reel of proportions usually associated with the post-baby bodies of every actress in Hollywood. These articles will claim the most radical and obscure treatments are responsible for these streamlined bikini bodies. Slimming procedures long associated with snake charmers and bank balances the size of your average Arab Sheikh.

The frustrating part is that obviously, these celebrities aren’t rubbing cream made from moon dust or something equally absurd into their muffin tops. So how are they achieving results without having to hide away to recover from surgery? What non-surgical fat removal treatments are they doing that are accessible to the rest of us?

Recently Christina Aguilera came clean on how she managed to slim down without surgery. She admitted that she had invested $10,000 in Fat Freezing Lipo. The procedure is CoolSculpting by Zeltiq and it permanently destroys fat cells. Where traditional liposuction vacuums out fat through incision sites, non-invasive fat freezing liposuction uses cryolipolysis to destroy fat. The CoolSculpting process cools the fat cells and they crystallise, shatter and die. These fat cells are then gone forever. A single one-hour treatment with CoolSculpting can shrink the fat in the area you treat by an average of 25 percent and costs only $850. 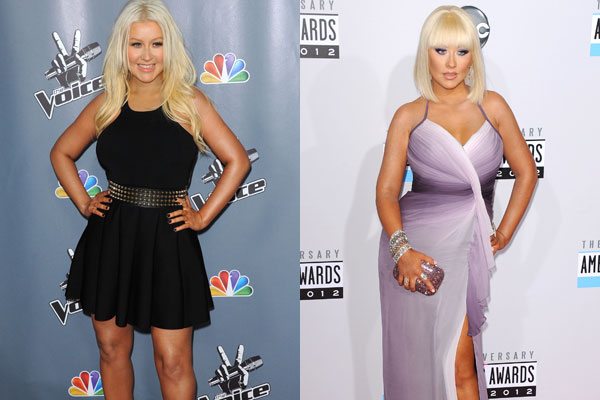 Slimmed down. Just a year apart.

With so many non-surgical fat removal options available what is the best choice? Well, Christina Aguilera had it right; fat freezing using CoolSculpting is the way to go. Other non-invasive treatments simply shrink the cell and temporarily remove the water from in and around the fat cell. This means that the fat cell can simply refill with water at a later date. Fat freezing using CoolSculpting is the only non-invasive form of liposuction that permanently destroys the fat cells.

A popular form of non-surgical lipo, CoolSculpting is safe, painless and takes only an hour of your time. The treatment involves a gel pad being applied to the area of unwanted fat, which is then sucked up into an applicator. Once snugly vacuumed into the applicator, it starts to freeze the fat as the process of cryolipolysis begins and your fat cells are destroyed. After the treatment, there is no downtime and around two months later the results start to show as your lymphatic system processes the dead fat cells.

As daunting as it might be in the depths of winter to put our hands up for a fat freezing treatment, celebrities have the right idea. Having CoolSculpting to permanently destroy your fat cells means that come summer, the only muffin top in your life will be an option for breakfast and not the pesky overhang you get in a bikini.

Coolsculpting is available at our clinics in Sydney, Canberra and Adelaide.

7 thoughts on "Fat Freezing: non surgical lipo to ward off the winter wobbles"