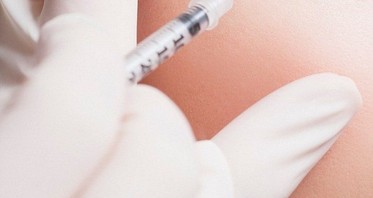 Since its release in June 2015, the demand for fat-dissolving injections has grown quickly. But how does it stack up to existing treatments like CoolSculpting, and is it the ultimate solution to the ‘double chin’ curse?

The fat dissolving injection, developed by the pharmaceutical company Allergan, is the latest fat-melting injectable drug to be approved by the FDA.  The treatment is a synthetic form of acid that is identical to the molecule naturally produced in the body to aid in the absorption of fat.

According to the American Society for Dermatologic Surgery, the issue of the double chin is rising – affecting 68 percent of Americans. For the growing number of patients wanting to address this problem area, the breakthrough non-invasive treatment is providing another option to surgical treatments.

Derek Jones, a dermatologist from the faculty at UCLA and a lead investigator in the clinical FDA trials of fat dissolving injections, told The Hollywood Reporter: “I’ve never seen a demand like this, except for with anti-wrinkle injections. We have a waiting list of people who have been calling for months.” 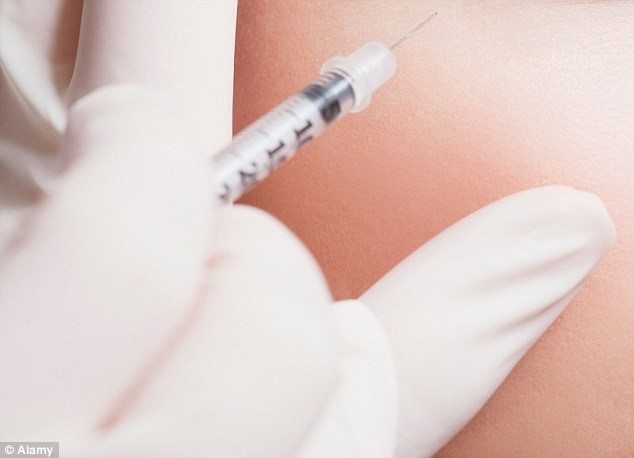 HOW IT WORKS: Fat is ‘melted away’ and excreted by the body

When fat dissolving injections are injected into the tissue below the chin, referred to as submental fat or fullness, it acts to disrupt the fat cells.

Immediately after the fat dissolving injection is released, it causes lysis – which destroys the membrane of fat cells.  As a result, the cells break down and release their fatty contents. While it’s not exactly like melting a stick of butter in the microwave, it does break down the solid fat cells. The body recognises the fat dissolving injection substance in a similar way to how the liver recognises bile. Therefore, the body naturally metabolises it before the by-product is excreted.

If injected correctly, all the healthy cells around the submental fat, remain intact and unaffected, as well as nearby nerves and muscles. 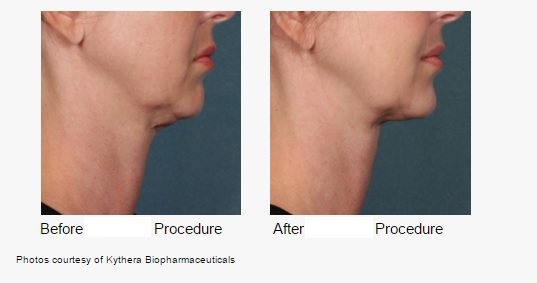 A series of fat dissolving injections can improve the chin contour

Patients can have up to 50 small injections of the fat dissolving substance during a single out-patient consultation. This can take about 20 minutes; and during this time the acid works to break down the submental fat.

In two clinical trials of patients with moderate or severe submental fat, significant reductions were seen.  After a series of treatments, patients have reported not only a reduction in the fullness of the chin area, but also an improvement in the contour.   The number of treatments required depends on how much submental fullness the patient has; but may participants of the FDA study saw noticeable results after three to four treatments.

Patients can have up to six treatments of fat dissolving injections to achieve their desired result.  These appointments should be scheduled in no less than one month apart.  According to the maker of the fat dissolving injections, results are long-lasting and patients will not be required to undergo re-treatment in the future as the fat is destroyed and will not return.

The aim of the new treatment is to remove the fat directly under the chin area to establish a more attractive cervicomental angle of the jawline.  This can make a huge difference to those with a double chin.

According to the fat dissolving injection website, more than 79 percent have reported being satisfied with the appearance of their face and chin.  They also noted patients have an improved self-perception as a result of the treatment.

Fat dissolving injections vs CoolSculpting in treating the double chin

CoolSculpting and fat dissolving injections are now two very popular non-invasive treatments aimed at removing fat in smaller areas of the body, such as the neck. Both treatments are safe and highly effective at treating the troublesome double chin, yet differences between the two remain.

CoolSculpting have created an applicator known as the CoolMini which is applied under the neck area for an hour to literally freeze the fat cells.  Similar to fat dissolving injections, the fat cells are broken down and excreted naturally by the body.  It can take up to four months to see the final results as the “melted” fat cells are removed over time.

In a clinical trial, which lead to the FDA approval of the CoolSculpting technique, 60 patients received one to two CoolMini treatments under the chin.  Patients on average saw a 20 percent submental fat reduction, and were highly satisfied with the procedure itself and the results. 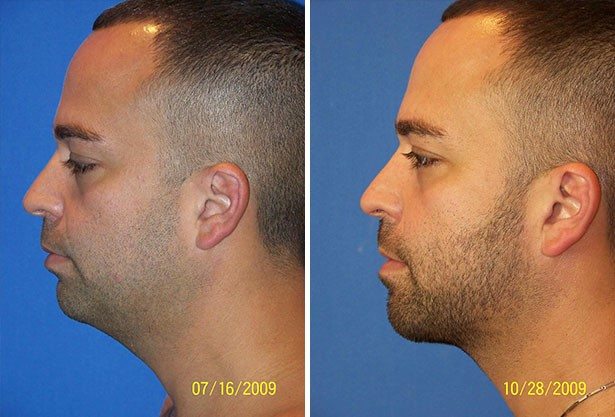 Fat dissolving injections vs Liposuction in treating the double chin

Liposuction is considered the gold standard in fat removal; especially in problems areas such as the neck.  Unlike fat dissolving injections, liposuction is a surgical procedure where fat is removed through small cannulas that are inserted into the treatment area through several 2-millimetre incisions.  It can also be used in a wide variety of areas, whereas the FDA have clearly warned consumers that “fat dissolving injections should not be used outside of the submental area”.

The results of liposuction can be impressive and Cosmos Clinic doctors believe it is a far superior treatment.  Patients are also treated in one single procedure, rather than it being a process of 3-4 treatments.  While fat dissolving injections can achieve skin tightening (depending on the amount of fat destroyed), there may be some skin looseness – which wouldn’t be experienced in a liposuction case.

There are clear advantages of the new treatment that can’t be ignored.  Patients are not required to go under sedation, meaning there is reduced downtime. This makes the treatment more convenient for some patients. However, it is important to keep in mind that (in some cases) surgical side effects are experienced after using fat dissolving injections. This can make the recovery similar to that of a surgical procedure.

The future of Fat Dissolving Injections for fat removal

Beverly Hills plastic surgeon, David Hopp, is one of the first US doctors approved to administer Fat Dissolving Injections; and he is surprised by its popularity. “There’s been a lot of interest in the community — patients started asking for it the day the FDA cleared it!” he tells The Hollywood Reporter.

As the injectable has a direct destructive effect on fat, Hopp believes it could take place of lipo.  Jones also agrees and adds that “the data says the largest percentage of users will be female. But males willing to take steps to get rid of double chins is a growing demo. A double chin can be genetic — you can be in shape and still have one.”

Currently, Fat Dissolving Injections are only approved for the submental area just below the chin with the FDA yet to know whether the product is safe or effective in other problems area. But this may not be the case in the future.  Dermatologist Peter Kopelson says FDA-approved doctors are able to use it “off-label”, meaning they can test its effectiveness in other areas.

“I suspect it will be for targeted use like love handles, under-eye fat pockets and fat above the knees — something even young women complain about. Not for large areas like buttocks, but this is definitely very promising”.

3 thoughts on "A New Treatment Designed to Melt Fat"