“Fractional” Fraxel Laser Resurfacing is a technology which delivers results approaching that of deep chemical peels or ablative laser resurfacing, without the discomfort and inconvenience of a lengthy healing period and with minimum risk. All traditional resurfacing methods treat the entire skin surface, to obtain a significant, “permanent” result.

How does the Fractional Fraxel Laser work?

The entire top (epidermal) layer of skin is damaged or removed, creating a visible wound and a loss of the skins protective function. Fractional Fraxel Laser Resurfacing treats a small “fraction” of the skin, leaving intact, the undamaged skin around each treated area to act as a barrier and reservoir for rapid healing.

The image below illustrates how fractional Fraxel lasers work by only treating a “fraction” of the skin at a time.

Fractional Fraxel Laser Resurfacing with the Profractional Sciton Laser uses an invisible laser beam which is strongly absorbed by water. The beam is less than 100 millionths of an inch in diameter, about the size of a human hair. The beam passes through the dry, outer layer of skin and wounds the underlying collagen. Nearby undamaged cells immediately move into this microscopically damaged area and heal the wounded area. During each treatment, millions of these microscopic areas are created, but most of the skin remains undamaged, allowing rapid healing. Further collagen remodelling and some skin tightening takes place over the next 3-6 months.

What are some indications to have the treatment done?

Fractional Fraxel Laser Resurfacing Treatment – What occurs during the treatment?

The laser head is evenly tracked over the treatment area. The skin is kept cool just after treatment with cold packs. The actual treatment takes approximately 30 minutes. As the anaesthetic wears off, a sensation of heat or “sunburn” may be experienced, lasting about 30 minutes. This is easily relieved by cool compresses. Elevation of the treated area on the evening of treatment will help keep any swelling to a minimum and discomfort is easily controlled with cool (not ice) compresses and pain medications such as Panadol.

What occurs after the treatment?

In the week after treatment, the skin may become dry and red, similar to that experienced after a sunburn. This “bronzed” appearance and dryness is from the surface of each laser “spot” which will separate and slough off. During this time, potentially irritating skin products such as AHAs or Retinoids should be avoided and only moisturizers and zinc oxide sunscreens should be applied. The redness and bronzing will gradually improve over a week or so.

Some patients will experience mild to moderate swelling for a few days after treatment and in rare cases, “streaking” or mild blistering of the skin may occur.

Vaseline should be applied to the area until healing takes place, which usually occurs within a week. 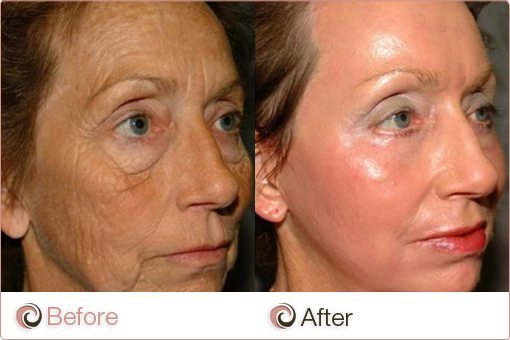 Complications of Fractional Fraxel Laser Resurfacing are rare. Mild blistering, especially on the chin and temples may occur at higher powers and densities, which will typically heal normally. Scarring from the procedure is virtually unknown. Hyper-pigmentation may occur in darker skinned patients, or patients prone to discolouration. Such patients can be pre-treated with bleaching agents to minimize any tendency towards discolouration. Patients with a history of lip blistering are treated with antiviral medications just before, and for a week after treatment. Fractional Fraxel lasers very rarely cause an outbreak of acne, the cause of which is unknown.

What other areas can be treated?

Unlike “traditional” or ablative laser resurfacing, Fractional Fraxel Laser Resurfacing may be used safely on areas other than the face. One of the most exciting applications of Fractional Fraxel Laser Resurfacing is for striae (stretch marks”). A recent pilot study of 20 patients showed great improvement in the appearance and texture of mature (white) striae after three treatments performed at moderate settings. Redness in the treated areas does seem to persist longer than on the face but fades in time.

Fractional Fraxel Laser Resurfacing is a safe and effective treatment for the appearance of sun damaged and wrinkled skin and acne scarring. The procedure has an excellent safety profile, with minor blistering being very uncommon, and scarring virtually unknown. A lifetime of aggressive sun protection is paramount in maintaining the improvement for this and other skin procedures.

How many treatments are needed?

The number of treatments necessary for a given result will vary with the power settings of the laser and the desired endpoint of treatment. Higher powers will cause larger “spots”, a greater penetration depth and more improvement per treatment, but with more redness, flaking, increased chance of blistering and a greater recovery time. Lower settings will cause the opposite effect. Likewise, the degree of desired improvement will vary from patient to patient. A typical treatment will combine the Fractional Fraxel Laser with PRP to obtain the best result. In severe cases up to 3 treatments may be needed but generally 1-2 treatments with PRP is sufficient to the obtain the desired outcome.

See us for a consultation

Our experienced team of medical practitioners, doctors and registered nurses are committed to the expert delivery of timeless natural beauty.
See Locations

Ready to answer all of your questions. Call or ask us below