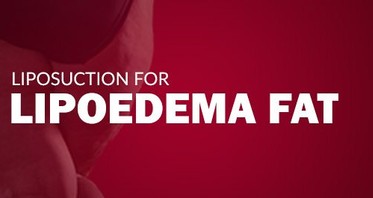 Jasna Tursic, 45, had spent 12 years in constant pain without ever knowing the cause. Her life changed dramatically, however, after she was diagnosed with Lipoedema, and the treatment turned out to be liposuction. 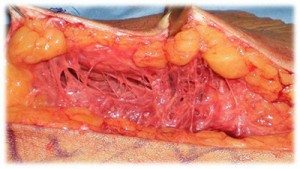 Lipoedema (also called lipedema) is a chronic condition that almost exclusively targets women. Early stages can be seen in puberty, although it can also occur post-pregnancy and during peri-menopause. Gynaecological surgery or extremely stressful situations can also trigger the condition.

There seems to be a family history, and is caused by an overgrowth of fat deposits in women of all body shapes and sizes, from the incredibly lean right through to those struggling with morbid obesity. Lipedema patients endure devastating effects on the legs (and occasionally the arms), ranging from tenderness to in extreme cases, immobility.

The diseased fat cells form a unique and unusual shape, normally from the waist down, to a clear and obvious line in with the lower legs, above the ankles in a bilateral, symmetrical shape. Beverly Hills Dr David Amron told FoxNews.com that the disease is “very specific to circumferential calf to ankle swelling…(with) heaviness on top of the knees, giving legs a tree-like look to them.” 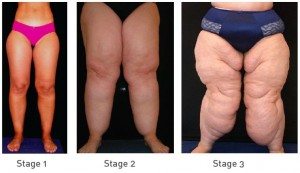 Unfortunately for Ms Tursic, her initial diagnosis of lipedema  was incorrect. Doctors actually mistook her condition for Lymphedema. While the two conditions are similar in that there is unnatural swelling of adipose tissue at the extremities, Lymphedema is linked to malfunctioning of the lymphatic systems that causes fluid retention, not growth of fatty tissue.

A clear sign of Lipoedema, that possibly should have alerted the doctors who misdiagnosed Ms Tursic, is that the feet are not affected, which is a typical side-effect of Lymphedema.

The outlook was not favourable for Ms Tursic. Her doctors predicted a progressive decline, culminating in her eventually becoming wheelchair bound. The lipedema fat was causing her so much pain that she underwent five separate surgeries for Lymphedema and wore compression garments for three years.

Despite changing her diet, exercising regularly and spending a lot of money on supplements, Ms. Tursic’s quality of life did not improve as the chronic pain persisted. Ms Tursic did not realize that although weight loss through diet and exercise may decrease subcutaneous fat, it has little effect on decreasing the amount of lipoedematous tissue in the body.

Light at the end of the tunnel 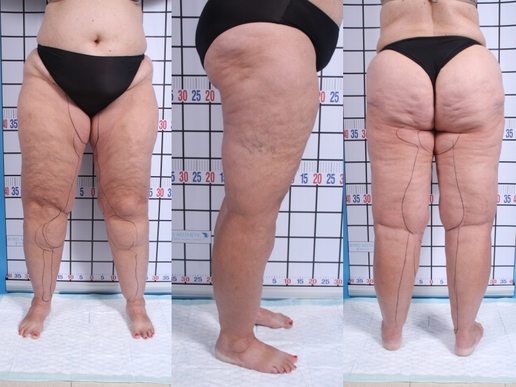 After consulting a local Utah cardiologist in March of 2012, she was finally correctly diagnosed with the fat disorder called Lipoedema. Ms Tursic was told the best way to relieve the pain was to remove the excess diseased fat by undergoing liposuction, a common cosmetic procedure.

While there now seemed to be a light at the end of the tunnel, this diagnoses created new complications. If the procedure was unsuccessful, damage to the blood vessels, connective tissue and lymphatic system was a real possibility. In other words, this lipedema treatment could potentially make her chronic pain and other related symptoms even worse. As such several liposuction doctors refused to perform the liposuction procedure.

“I was crying and said, ‘You are my last hope! Please do your best,” she said.

The day after the procedure Ms Tursic was on her feet, and her life has improved drastically since. She is off painkillers, isn’t fearful of a future life in a wheelchair as was predicted by her doctors, and exercises regularly at her local gym.

Other common treatments for Lipoedema

For some people wearing compression garments and manual lymph drainage can reduce the pain caused by Lipoedemic fat; however, this didn’t work for Ms Tursic. Her lipoedema seemed to be a chronic condition that didn’t respond to conservative therapy.

Some women have seen a positive result in the reduction of pain and reversing Lipoedema without surgical treatment. It involves starting an elimination diet, low impact exercise regime and a herbal course of action to combat the inflammation. In Australia and throughout Europe this course of lipedema treatment has been gaining momentum.

Cosmetic surgery can be used to treat medical conditions

While liposuction is often considered a vanity procedure, there are clear cases of advanced liposuction techniques having enormous medical benefits. Ms Tursic’s disease is now in remission, and there are no signs of lipo-lymphedema or chronic pain returning. All follow up appointments show no need for additional lipedema surgery.

“(The surgery) changed my life so much,” she said.