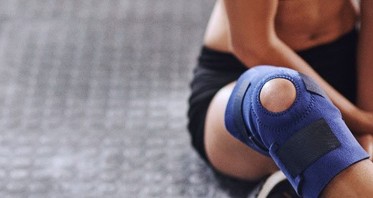 One in five Australians suffer from chronic pain and according to Pain Australia, 65 percent report the pain to have an impact on their daily lives affecting sleep, work, sex, exercise and overall self-care.  It’s no surprise then that the growing technologies in the field of biological medicine have been watched so closely over the last few years.

The new treatments of Regenokine, also known as Orthokine, and Platelet Rich Plasma Therapy have the potential to elevate chronic pain and osteoarthritis and in turn, put orthopaedic doctors out of business.  Professional athletes including Kobe Bryant, Lindsey Berg, Alex Rodriguez and Tiger Woods have all reported incredible results following the treatment of these therapies.  With an increasingly ageing population, these treatment methods could have an incredibly positive impact on health worldwide as well as the quality of life.

The anti-inflammatory and pain killing technique of Regenokine

Developed by spinal Dr Peter Wehling and molecular biologist Dr Julio Reinecke in Düsseldorf, Germany, Regenokine is fast becoming the ultimate anti-inflammatory and pain-killing treatment.  During a course of Regenokine, which involves six injections over six days, blood is drawn through syringes from the patient’s body.  It is then treated with heat in order to separate and concentrate the blood’s healing properties.

The process of incubation can take up to 24 hours during which proteins are produced that help reduce inflammation and stimulate cellular growth.  This results in a yellowish, thick serum which is believed to contain properties that can stop interleukin-1, known to cause inflammation and arthritis. 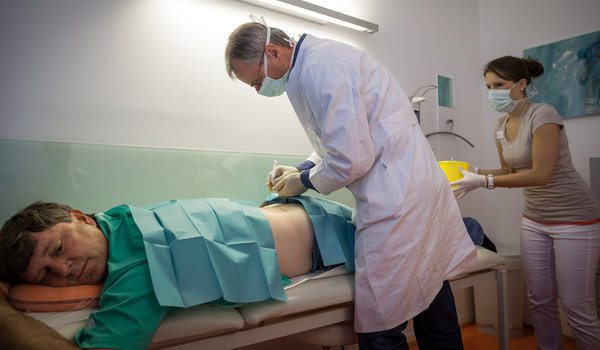 The serum is then injected back into the patient’s affected area such as the joint.  The patient can experience pain relief relatively quickly after the Regenokine treatment with noticeable results in two to three days.

What makes this procedure so appealing is that it’s non-invasive and uses the patient’s own blood as treatment.  This reduces the risk of side effects including serious infections and eliminates the need for an intense, lengthy physical rehabilitation.

How long the pain relief from Regenokine lasts is unknown and may be dependent on the patient. “We see a positive result in 80 to 90 percent of patients,” says Wehling and usually he doesn’t see these patients for years post-procedure, if at all.

Another new procedure that is transforming the treatment of long-term pain is Platelet Rich Plasma Therapy, also known as PRP injections.  During a PRP injection procedure, the patient’s blood is drawn and placed in a centrifuge.

Unlike Regenokine, the blood is not heated to increase the concentration of the blood’s anti-inflammatory proteins before it is spun, however, it is separated to isolate rich platelet plasma from the rest of the blood.   In the normal healing process, platelets containing clotting and growth factors aggregate together.  Once activated, they release granules that contain vital growth factors leading to the stimulation of the inflammatory cascade and the healing process.

When the blood is extracted and separated, the concentration of these platelets is increased up to four times the amount seen in normal blood.  The plasma is then injected back into the patient through ultrasound guidance. According to the Prolotherapy Institute of Los Angeles “PRP enhances a ‘controlled’ inflammation that rebuilds tissue, strengthening ligaments, tendons, and promoting new cartilage growth.”

There have, however, been some evidence to suggest PRP therapy just creates a placebo effect when one group of participants in the study were injected with a saline solution and the other the plasma.  Both groups recorded pain relief after the treatment. 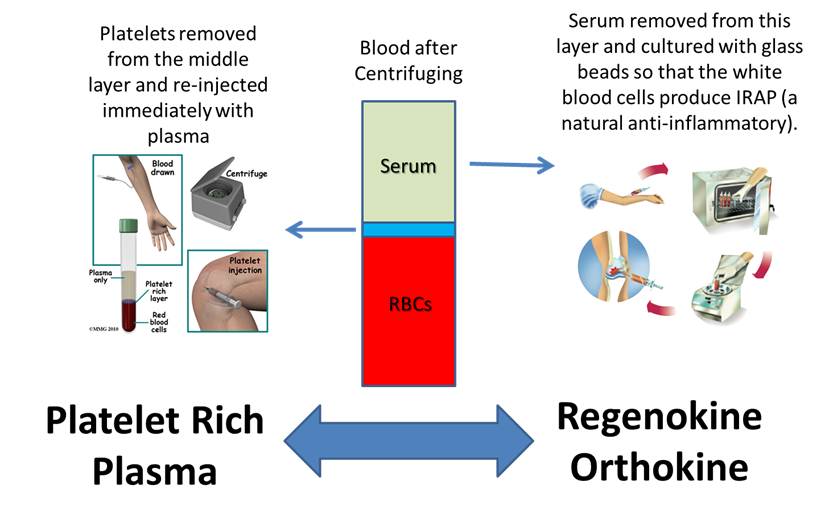 The concept of the treatments is not to correct mechanical problems

While differing in technique, both the treatments of Regenokine and PRP are designed not to correct mechanical problems in areas such as joints and lower back.  Wehling’s approach is to treat inflammation as a cause of the tissue damage and also a symptom of the chronic pain.

The PRP treatment, on the other hand, is aimed at rebuilding the tissue.

In the past nonsteroidal anti-inflammatory drugs (NSAIDs) and/or surgical treatments have been prescribed as a temporary relief for chronic pain, however, these often further complicate and weaken the problem areas.  This was initially the cause of the rise in PRP therapies popularity, as more experts began rethinking orthopaedic surgery due to the growing evidence many of the common surgeries simply don’t work.

According to a study published in The New England Journal of Medicine, approximately 700,000 people in the U.S. undergo arthroscopic surgery on the knee joint alone.  Research shows that the surgery is unable to repair the damage to the knee-cushioning cartilage any better than if the patient did nothing at all.  Similar evidence has been found in those who undergo common back or shoulder surgeries.

In an interview with New York Times, Wehling himself says “The potential of biology to treat orthopaedic problems is high because it has only been developed a little while.”  This new form of medicine is slowly replacing the traditional Band-Aid treatment, particularly amongst elite athletes.

Wehling is, however, realistic about his patented treatment saying that sleep, nutrition and conditioning are all important aspects of the therapy.  “There’s no such thing as the one therapy that fixes everything,” he says.    “Pain stems from bad habits, like poor sitting posture, or overuse, and no one is really immune to it.”  All of Wehling’s patients are supplied with an individually tailored nutrition and training program following the injections to increase the end results.

Though the treatment of Regenokine is not been approved by the U.S. Food and Drug Administration (FDA), it has not stopped people from receiving the therapy.  Thousands of patients worldwide have travelled to Wehling’s clinic in Germany for the treatment, most likely due to the positive results seen in high profile athletes like Kobe and Rodriguez.

In Australia & the U.S., several clinics now offer a similar treatment known as Orthokine, however, at this stage, it is not covered by private health cover and carries a hefty price tag.   A number of devices for the PRP therapy have been approved the FDA and are becoming increasingly more popular in both countries.  Typically, PRP therapy is also not covered by insurance, however, is slightly cheaper and may require fewer courses.

The popularity of these treatments is illustrating that many people are willing to pay a considerable amount to avoid surgery and find relief from debilitating pain.   These minimally invasive procedures could be the future of effectively treating chronic joint pain and osteoarthritis and may become a part of mainstream medicine.