For decades, we have relied on the results of a tape measure, scales and a simple BMI (Body Mass Index) calculation to tell us whether we are overweight, obese, normal or underweight. However, the latest research, published in Cell Metabolism, reveals that rather than performing a BMI calculation, we should be drawing blood to get the best picture of our current and future weight and health.

There’s no arguing the BMI has served us well. It has helped millions of people, who might otherwise have not bothered, understand their weight and the attributed health implications. However, as a predictor for future obesity and health concerns, it does not tell us nearly enough.

Firstly, BMI bands people together into broad groups. This generalisation means that an Olympic athlete and ‘Joe Average’ can both be classified as ‘overweight’, despite an athlete’s minimal body fat. Conversely, while two people may appear to be slim and in the ‘normal’ category, it doesn’t tell us if they are TOFI (Thin on the Outside Fat on the Inside). Secondly, BMI results cannot predict future obesity or disease. 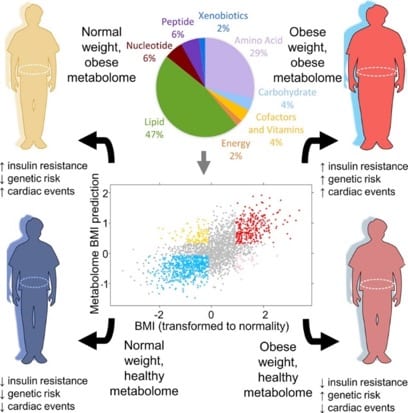 Scientists know that there are over 100 genes that play a role in our BMIs but they do not explain enough about population variations or predictions for future obesity. Taking one drop of blood plasma researchers examined blood, or, to be more exact, metabolites (a substance involved in our metabolism) and found them to be between 80-90% accurate at predicting obesity as well as heart disease, diabetes and kidney problems. Of the 1000 metabolites extracted, 49 of them appeared in research taken from a study of UK and US patients. These were then used to identify one-third of the predictors associated with obesity and weight gain.

What will your mBMI tell you?

An unhealthy mBMI profile means that even those with a normal BMI have a 50% greater chance of becoming obese in the next ten years and a staggering 200-400% risk of heart disease, as well as other medical conditions such as abnormal lipids, resistance to insulin, increased abdominal fat and high blood pressure.

Metabolites both flag and trigger diseases, so regular monitoring makes sense. Produced in the gut, they are thought to be influenced by gut microbes with a huge variation between people.

Start thinking about your future weight and health

What these results tell us, is that it’s not enough to diet and hop on the scales to be ‘healthy’. We need to go much deeper into our body’s makeup and consider what we are eating, how much of it we are consuming and regularly monitor predictors for future weight and health.

We know that losing weight can be difficult, especially if you are currently in the morbidly obese range. Sometimes, opting for a fat reduction procedure gives people a starting boost to help them on their journey to a healthier lifestyle. Another option for the obese is to consider Mega liposuction which, along with other surgical procedures is worth investigation.

Related: See our article on why fat people struggle to lose weight.