Men, It’s Time to Get in Shape for Pregnancy 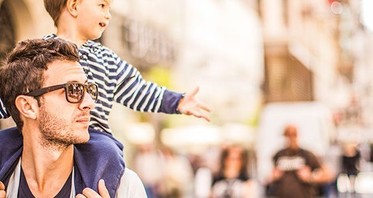 In the past, much of the pressure of a healthy pregnancy and baby is placed on the health of the mother. But now the evidence is growing that the health of a child’s future has just as much to do with the father-to-be’s waistline and lifestyle habits. Men, it’s time to shape up before you try and conceive.

Director of Andrology Australia (the national centre for male reproductive health based at Monash University), Professor Rob McLachlan, says “We know that a woman’s health and weight affect her unborn baby’s health – if a woman is obese or has raised blood sugar or high blood pressure in pregnancy, she can pass on a risk of these same problems developing in her children. But evidence is now emerging that a man’s lifestyle habits and weight before conception can make a difference too – and if he’s obese at the time of conception it can increase the chances of his children developing weight problems.” It a common perception that the reason for a child being overweight is because of the parent’s lifestyle habits influencing the child’s behaviour.  If a parent eats a lot of kilojoules and doesn’t exercise, it’s easy to assume the child will pick up on these same bad habits.  Equally, if the parents are serving up unhealthy food each day, you would expect the child’s diet is the cause of their weight gain.

While that perception is still relevant, growing evidence suggests that the child’s weight and health are heavily influenced before they’re conceived or born.  According to McLachlan, the father’s health can play a big role in his future child’s health.

In a 2015 study conducted by the University of Adelaide, researchers analysed the effects weight gain of male mice had on their offspring.  They divided one litter of male mice into two groups.  One group were overfed until they were overweight and the other remained at a normal weight.  When comparing the offspring of these two groups, the mice fathered by overweight males were themselves overweight.

A flabby waistline may affect the DNA of sperm

New research from Denmark has found there is a difference between the sperm cells of lean and obese men that could influence the appetite of their future children.  Published in the journal Cell Metabolism in December, the study suggests that sperm carries critical information about a man’s weight.

McLachlan explains that this is all to do with epigenetics, where lifestyle habits and the environment has the ability to cause genes to switch on and off.  The activation and deactivation of these genes stimulates a change in the way the DNA is read with the effects flowing onto our children.

“But the good news is that you can turn the ship around by changing lifestyle habits – and that’s a powerful message,” says McLachlan, who hopes this revelation may provide an incentive for men to be more proactive and diligent when it comes to weight loss.

“Sperm takes two months to develop which means that the most important time for men to improve their health and lifestyle is in the months before conception. This is a great reason to be quitting smoking, drinking in moderation, eating a healthy diet, exercising regularly and losing a few kilos if they are overweight,” he says.

While it is still early days in this research, these initial results should raise awareness about the importance of lifestyle factors, particularly our diet, has prior to conception.  What we eat and our level of activity prior to finding out we are pregnant is so important to our future children’s health and their development.

“It’s a precious thing to create a child and while our parents might have thought about what school their future children would go to, parents today need to think about their health before they conceive, especially as we’re much heavier than we were 15 years ago and we’re having children when we’re are older. It needs to be a much louder message”, says McLachlan.

Shred some kgs, drink less and ditch the cigarettes

Before you adhere to a strict diet, McLachlan says “you don’t have to lose a ridiculous amount of weight to make a difference – when the process of weight loss starts, sperm quality begins to improve.”  There are, however, some serious considerations you should make prior to conceiving.

It is advised women avoid alcohol when trying to conceive and throughout the pregnancy, but as men metabolise alcohol differently, reducing their intake is recommended.

As for the cigarettes, it’s time to give up before you plan on having a baby.  Smoking affects the fertility of both men and women and increases the risk of health problems occurring in children not just during pregnancy but before conception.

McLachlan explains “Cigarettes put stress on the integrity of DNA and some studies have found that the children of fathers who smoke have a higher risk of health problems including cancer.”

These latest findings suggest that if you want the best chances of naturally conceiving and having a healthy pregnancy, it’s time for both partners to look at their lifestyle and start making healthy choices.