Is Sugar Keeping You Trapped in an Addiction Cycle?

Sugar has become the new food villain; first, it was fat, then carbohydrates and now sugar is in the firing line.  Now researchers are not only saying sugar is bad for you, they are calling for the ‘toxic’ ingredient to be regulated just like alcohol and cigarettes. Sugar, they say, is a drug and those consuming this sweet food should be warned of the dangers.

Robert Lustig, leading expert in childhood obesity at the University of California, San Francisco, School of Medicine says sugar is a “poison” and should be considered the “most demonised additive known to man”.  While sugar is just empty calories with no nutrients, Lustig says it’s the effect it has on our bodies that makes it a toxin.  Sugar, he says, is something that is killing us and it is a substance people are abusing.

It might sound dramatic, but Lustig is not alone in his opinion.  Dutchman Paul van der Velpen, the head of Amsterdam’s health service says that “sugar is the most dangerous drug of the times” and is harder to kick than other forms of addiction like smoking.

Van der Velpen is calling for a sugar tax and to have legal limits set on the amount of sugar that can be used in the making of processed foods.  He also would like to see warnings, similar to those on cigarette packets, altering consumers that “sugar is addictive and bad for the health”.

The problem is not the calories, it’s the way we metabolise sugar

In this sense, sugar is sugar and calories become irrelevant.  You could eat 100 calories of glucose in the form of bread or 100 calories of sugar which is half glucose and half fructose.  The calories are the same, but the way we metabolise them is different.  Van der Velpen agrees with Lustig saying the research suggests that unlike fat or carbohydrates, sugar actually upsets the bodies mechanism.

The fructose in sugar and high fructose corn syrup are both metabolised primarily by the liver.  The glucose and starches, on the other hand, are metabolised by every single cell in our body.  By consuming sugar, be it in the form of lollies or processed foods our liver has to work harder due to the combination of fructose and glucose than it does if you ate the same amount of calories in the form of starch, which only has glucose.

Take that one step further, if you’re drinking sugar in the form of a soft drink or fruit juice the fructose and glucose will hit the liver very quickly, more than it would if you ate an apple for example.  The liver will have to work much faster which affects how it metabolises it.  In animal trials, fructose arriving into the liver quickly and in generous amounts sees most of it convert to fat, which induces insulin resistance.  This is a condition which is the leading problem in obesity and has been associated with the underlying defect in heart disease, type 2 diabetes and cancers.

While sugar has been well known for contributing to our ever-expanding waistlines and tooth decay, research suggests the consequences of eating sugar is metabolic syndrome increasing your risk of heart disease, diabetes and cancer.

The mounting research clearly supports that sugar is bad for our health, but should it really be likened to drugs like cocaine? 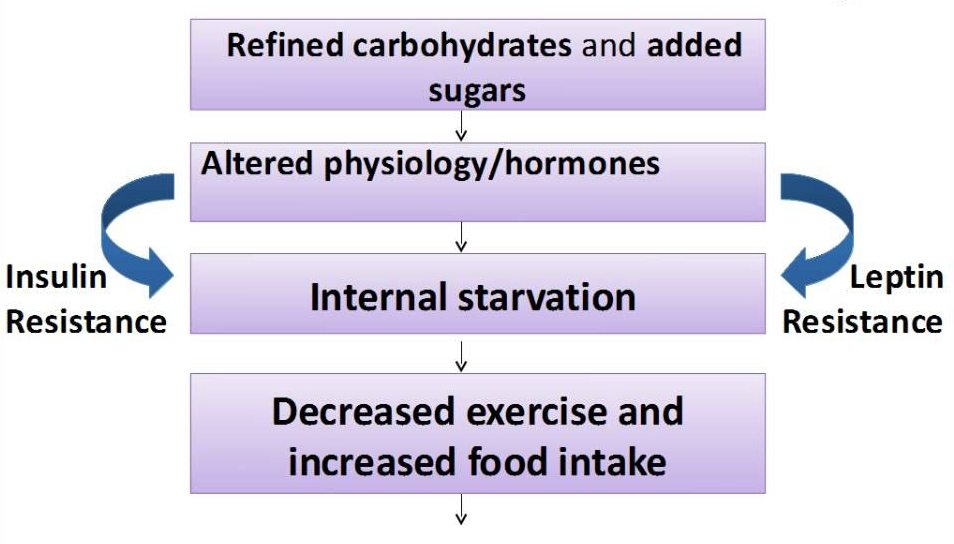 Leading cardiovascular research scientist at St. Luke’s Mid-America Heart Institute in Kansas City, Mo James DiNicolantonio believes so.  “When you look at animal studies comparing sugar to cocaine, even when you get the rats hooked on IV cocaine, once you introduce sugar, almost all of them switch to the sugar”, he says.

DiNicolantonio is quick to differentiate between refined and intrinsic sugars, such as those found naturally in milk.  This form of sugar he says is not necessarily unhealthy and that we are biologically drawn to these sugars because they help our body to store fat, allowing us to survive winters in Palaeolithic times.

He believes we have developed a sugar addiction because we are consuming such a high potency and dose of refined sugars.  According to DiNicolantonio, this addiction is not biological; it’s neurological.  As we consume a certain amount of sugar over time, our brain’s neurochemistry is altered causing us to experience dopamine depletion and sugar withdrawals.

Studies are showing sugar can become more addictive than recreational drugs like cocaine.  “You get this intense release of dopamine upon acute ingestion of sugar. After you chronically consume it, those dopamine receptors start becoming down-regulated — there’s less of them, and they’re less responsive,” says DiNicolantonio. “That can lead to ADHD-like symptoms … but it can also lead to a mild state of depression because we know that dopamine is that reward neurotransmitter.”

While DiNicolantonio doesn’t suggest people should never consume sugar, he says people should limit their intake to avoid addition, which will eventually cause pre-diabetes.  As with Van der Velpen and Lustig, he is calling on governing bodies like the FDA to help inform and discourage consumers from eating so much sugar.

“The government subsidises corn, so high fructose corn syrup is cheaper than sugar, and that’s why it’s so ubiquitous in our diets,” DiNicolantonio explained. “They need to start subsidizing healthy foods. We shouldn’t be able to eat a Snickers bar for cheaper than we can eat an apple.”