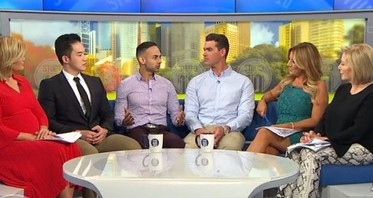 Cosmetic surgery has previously been considered a woman’s domain, largely influenced by celebrities and models. However, a growing number of men are opting to enhance their looks with cosmetic treatments, including a surprising group: tradies.

Michael Khan and Trent Wright are two Aussie tradesmen who have recently undergone cosmetic procedures at Cosmos Clinic to address unwanted weight and improve their self-confidence.

Vaser High Definition Liposuction gave a tiler his confidence back

Trent Wright, a 28-year-old wall tiler, told the Daily Mail Australia he had made every effort to beat the excess weight in his problem areas without any success before considering surgery. “I spent years to try to lose the weight around my chest and flanks. At one point, I ended up very tiny and skinny but the weight was still there”, he said.

Trent chose to undergo Vaser High Definition liposuction to remove the stubborn layer of fat from his ‘love handles’ and ‘man boobs’.

Also known as Vaser 4D Liposuction, the procedure uses ultrasound technology to soften the fat making it easier to remove with a gentle form of liposuction. The state of the art technology caters for precision, allowing the cosmetic practitioner to accurately sculpt the body. Unlike standard liposuction, Vaser High Definition Liposuction can create an athletic and contoured look.

The treatment around Trent’s ‘man boobs’ and ‘love handles’ produced instant change for the Western Sydney tiler telling the Daily Mail Australia it “was the greatest thing I have ever done”.

“Everything I have been trying to do in the last 10 years, the doctor basically did in an hour and a half”, he explained. Trent only required one treatment to provide him with the change he needed to be confident amongst his fellow tradies.

As a tradesman, Trent said during the summer the blokes are all working with their shirts off.  This brought him a constant source of stress and no matter how hard he worked out in the gym, he couldn’t lose the stubborn fat. Choosing cosmetic surgery was his next step and he’s not ashamed to share his story to encourage others.

“It’s nothing to be ashamed of, everyone has something about their bodies they don’t like. This was just mine. I wasn’t ashamed. The end results are worth it.”

Part-time carpenter, Michael Khan also opted for Vaser High Definition Liposuction after a long battle with the stubborn fat around his stomach and ‘man boobs’.

The 30-year-old underwent two treatments of liposuction at the Cosmos Clinic to target the unwanted fat and contour his figure.

“I needed to get it [the surgery] done”, he told the Daily Mail Australia. “Dieting and training just weren’t helping. The stubborn areas were too stubborn. I was working hard for it day and night and unfortunately it wasn’t changing.”

Michael acknowledged the decision to seek out cosmetic surgery wasn’t solely about getting rid of the persistent fat. The carpenter said it was a “personal choice” to help him boost his self-esteem, which had been depleting over the years.

“I look like a better man. I am more confident and more fit.” Michael added that the common perception of cosmetic surgery is that it’s reserved for women, however this couldn’t be further from the truth. It can help anyone to “…be a better person in life.”

Dr Joseph Ajaka agrees with Michael having seen firsthand a greater increase in the number of men booking in for cosmetic surgery. In fact, there has been an 80 percent increase in male Vaser 4D Liposuction treatments for men at the Double Bay clinic.

“Men are influenced by social media and the rise of selfies just as much as women are,” Dr Ajaka tells the Daily Mail Australia. Men are feeling under more pressure to take care of their appearance and look good, he notes.

The Vaser High Definition Liposuction treatment in particular has been popular among men. While there is growing interest from tradies, Dr Ajaka explains men, regardless of their industry, are more conscious of how their physical appearance can impact their self-confidence, especially in the workplace.

“It’s not uncommon for tradies on job sites to work shirtless and more men are coming in because they want to feel comfortable around their colleagues”.

For some people, turning to a cosmetic procedure like Vaser High Definition Liposuction may seem like a quick fix to achieving the body they desire. However, Dr Ajaka says the decision is usually made after more traditional efforts such as dieting and exercise has failed.

“They’ve usually exhausted all other options with diet and exercise,” he said.

It’s also important to note, the liposuction treatment is not a weight loss solution. The best candidates for the Vaser High Definition procedure are those who are already fit and healthy with good skin tone and muscle bulk. Tradies are typically already strong and fit which will help to see greater results.

Maintaining a healthy diet and continuing to workout after the procedure will help maintain the sculpted, definition long term.