Paediatrician Dr. Lustig labels sugar a "Toxin" and a "Poison" 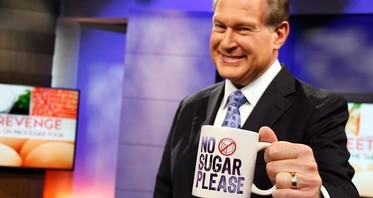 Obesity, heart disease, cancer and type 2 diabetes are all modern health conditions that are crippling our population worldwide. The disease diabetes has now reached epidemic proportions with over 417 million people affected globally. That figure is expected to rise to staggering 642 million by 2040.

By then, there will be a good chance the person standing next to you on the train, your colleague or even your children will have diabetes.

90 percent of those currently living with diabetes have type 2 diabetes, which results from their body’s ineffective use of insulin.  This form of diabetes was previously only seen in adults, but now children are developing the condition at a worrying rate.

Why is diabetes advancing rapidly worldwide, every single year?

Dr. Robert H. Lustig, a paediatrician in childhood obesity and author of Fat Chance: The Hidden Truth About Sugar, Obesity and Disease, says it’s sugar that is messing up the liver metabolism and resulting in disease.

Why sugar is considered a toxin

Lustig has been very vocal in labelling sugar as a “toxin” or a “poison” and he’s not just referring to the white granulated form we add to our coffee; he also means high-fructose corn syrup, “the most demonised additive known to man”.

Having spent over 16 years studying the effects of sugar on our body including the central nervous system, metabolism and disease, Lustig has concluded that the problem isn’t so much to do with calories as it is the actual make-up of the food we’re eating.

In a study published in the open journal PLOS One, Lustig and his colleagues examined the relationship between sugar consumption and the rate of diabetes in 175 countries.  In those countries with a high level of diabetes, sugar was most accessible.

The rates of diabetes increased by 1.1 percent for every 150kcal of sugar consumed by each person per day.  That’s about the same amount of sugar in a can of Coke.  If we put this in perspective, if everyone in the U.S. drank one can of Coke a day, almost 3.5 million more people will develop diabetes.

It would be easy to think calories are to blame for the rising rates of diabetes, however this study suggests otherwise.  Lustig says while total calories begins to explain an increase in the occurrence of diabetes worldwide, the effect size is relatively small.

Breakdown what those calories are and the only one that correlates with an increase in diabetes is sugar.  According to Lustig, a calorie is not a calorie.  Sugar is 50 times more potent than total calories when explaining diabetes rates worldwide.  Sugar is the only food on the planet that is both fat and carbohydrate, says Lustig. All other foods have either one or the other, not both. Think of all the fatty fruits like avocado, coconut and olives – they are all made up of fat with no carbohydrate.

How sugar is messing with your liver

Glucose is metabolised by all the organs of our body, with only 20 percent going to the liver to be metabolised.  Every living organism on the plant can digest, absorb and metabolise glucose.  It’s what our cells use for energy and if we don’t get it from our diet, our body will make it.

Fructose on the other hand, can only be metabolised in the liver because it is the only organ that has the required transporter for it.  Overloading the liver with fructose causes a big problem as it will turn straight into fat.  This initiates a mitochondrial breakdown leading to disease.  We’re getting sick because fructose is a chronic liver toxin in much the same way alcohol is.

“Our livers have a capacity to metabolise some fructose, they just can’t metabolise the glut that we’ve been exposed to by the food industry”, says Lustig.  Most of the fructose that accumulates in the liver is causing what is referred to as non-alcoholic fatty liver disease.

The more fat accumulating in the liver, the more resistant our liver becomes to insulin. This drives the pancreas to produce extra insulin, a hormone which causes energy to be stored in fat cells.  It is excess insulin that is driving weight gain, high blood pressure, heart disease, dementia and even cancer.

Eventually, the pancreas burns out and can’t make enough insulin to drive blood glucose into the cells.  This is the precise point when diabetes occurs.

Lustig is directly taking on governments and the food industry in the U.S. to tackle the problem of sugar.  While he doesn’t suggest eating burgers on a regular basis is okay, his main focus is on food products that substantially raise insulin levels in the body. Lustig suggests 75-80 percent of all obesity is solely the blame of insulin.

According to Lustig, the American governments hands are tied as they’re “in bed with the food industry” because over 6 percent of the country’s exports are food. And while some members of the food industry like PepsiCo have attempted to make a change, they’re struggling to maintain them.  Indra Nooyi, chief executive officer of PepsiCo, has been driving the company towards the manufacture of healthier products.  She is believed to be having troubles convincing the board of this new direction as the healthier products have resulted in a substantial loss of money.

One governing body that is initiating change is the NHS, who have recently announced that by the year 2020 a 20 percent tax on sugary drinks and snack in UK hospitals will be actioned.  Diabetes UK has welcomed the tax hoping it will tackle the country’s rise in obesity and rates of type 2 diabetes.

Director of prevention of type 2 diabetes at Diabetes UK Louise Ansari, says “The NHS is taking a brave and much-needed step by introducing its own tax on sugary drinks and snacks in hospitals across England to encourage healthier lifestyles.”

While these initiatives are positive steps in tackling the health epidemic of type 2 diabetes, Ansari agrees with Lustig in that this is not enough. “The government must also act on recommendations made by Public Health England which include: restricting marketing of unhealthy foods to children, reducing and rebalancing the number of price promotions offered on unhealthy foods, and implementing a clear and transparent programme for reformulating unhealthy foods and reducing portion size” says Ansari.

In the U.S., the American Heart Association published a statement in 2009 of which Lustig was the co-author. It states Americans consume an average of twenty-two teaspoons of sugar in a day.  They recommend that intake be reduced to six teaspoons for women and nine for men.

Lustig says “That’s a reduction by two thirds to three quarters. Is that zero? No. But that’s a big reduction. That gets us below our toxic threshold”.  His ultimate goal is to have sugar removed from the foods that don’t need it like bread, salad dressings and condiments.

For now, Lustig’s solution for you and I to avoid being at risk of developing diabetes and other chronic health conditions is to “eat real food”.

One thought on "Paediatrician Dr. Lustig labels sugar a "Toxin" and a "Poison""