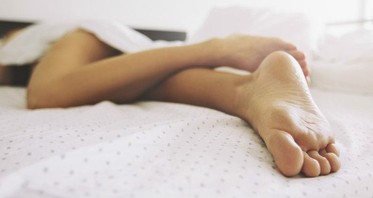 For years, we have been told that a lack of sleep affects our memory and cognitive performance. Now here’s more evidence to suggest sleep should be a priority. According to a recent study which explores the facial cues of those who are not getting enough beauty sleep verses those who do, you look “sad” when you are sleep-deprived. Great. So not only do we feel crappy and don’t function well, we look terrible to others regardless of how much concealer we layer under our eyelids.

Published in the journal Sleep, the Swedish study set out to investigate the facial cues people use to recognise when someone is sleep deprived or getting an adequate amount of sleep. 40 participants examined 20 facial photographs of women in regards to fatigue, 10 facial cues and sadness.

The somewhat unlucky women who appeared in the images were photographed at 2:30pm after a normal night’s sleep and then again after 31 hours of sleep deprivation following a night of just 5 hours sleep.

The faces of sleep deprived women were perceived as having more “hanging eyelids, redder eyes, more swollen eyes, darker circles under the eyes, paler skin, more wrinkles or fine lines, and more droopy corners of the mouth”. It was also found that the sleep-deprived women looked sadder than they did after a normal night sleep.

So it’s not just the dark circles under our eyes that are giving away our lack of sleep. The eyes, mouth and skin are all effected and researchers suggest because these particular facial regions are important in communication, being fatigued may carry social consequences.

“Since faces contain a lot of information on which humans base their interactions with each other, how fatigued a person appears may affect how others behave toward them,” stated researcher Tina Sundelin, M.Sc., a doctoral student in the department of psychology at Stockholm University in Sweden.

A lack of sleep can cause our skin to age faster

This is not the first study that has linked lack of sleep with worsening of our physical appearance. A clinical trial at University Hospitals Case Medical Center in the US discovered sleep deprivation could also cause your skin to age faster. Yes, you read right. Now we are going to look sad and old!

The study involving 60 pre-menopausal women between the ages of 30 and 40 found that of the half who feel in the category of poor quality sleep, showed signs of premature skin aging including fine lines, uneven skin tone and reduced skin elasticity. They also found a decrease ability for the skin to recover after sun exposure, whereas those who received quality sleep could recover more quickly from stressors to the skin including sun and environmental toxins.

Not quite convinced that sleep has such as profound effect on your skin’s appearance and ability to ward of aging? Take a look at this video featuring four people who admit to not getting enough sleep. A makeup artists show them what they’ll look like in 20 years if they keep their low-sleeping habits up.

Head researcher, Dr. Elma Baron, stated their study “conclusively demonstrates that inadequate sleep is correlated with reduced skin health and accelerates skin aging…Insufficient sleep has become a worldwide epidemic. While chronic sleep deprivation has been linked to medical problems such as obesity, diabetes, cancer and immune deficiency, its effects on skin function have previously been unknown.”

Our stress hormone, cortisol could be largely to blame

New York dermatologist, Dr. Shari Lipner, points out our poor appearance and signs of premature skin aging could be largely caused by our stress hormone, cortisol.

The cortisol hormone is naturally secreted by our adrenal glands situated on our kidneys. The role of cortisol is to regulate the metabolism of carbohydrates, fats and proteins in our body. It is vital for helping our body’s response when it enters the “fight or flight” mode in times where we are under acute stress or attack. It does this by providing the body the reserves of strength it requires to survive and then plays a role in helping the body return to homeostasis when the threat has disappeared.

Our levels of cortisol fluctuate throughout the day and night. In an individual with balanced hormones, cortisol should be at its highest in the morning when you are waking up. The levels continue to decrease throughout the day arriving at their lowest at night to allow for sleep. Night time is not when you want your cortisol to be at their peak as it heightens your alertness.

Several studies have found that chronic sleep deprivation can cause cortisol imbalances. One particular study published in the Journal of Nursing Research found shift workers who sleep during the day experience an increase in their cortisol secretions, which diminished their quality of sleep and results in 1 to 4 hours less sleep then compared to the average night sleepers.

The effects of cortisol on our skin’s appearance

Your skin’s appearance can take a hit when you experience either abnormally high or low levels of cortisol making you look like a train wreck. According to Dr. Lipner this can result in:

You may also notice the skin of your body appears thinner or bruises easily when you have abnormally high cortisol levels. Stretch marks of pink or purple colour may develop on the legs, arms, buttocks, stomach or breasts. Patches of increased pigmentation on your knees or elbows can result due to low levels of cortisol.

The effects of cortisol on your body’s weight

Cortisol imbalances do not only effect your skin making you look ‘sad’ and accelerate aging. Persistently high levels of cortisol can cause a negative effect on your body’s weight as it stimulates your appetite and cravings as well as promotes fat accumulation.

This is translated into visceral fat as this form of fat tends to have more receptor sites to secrete cortisol and increase blood-flow when compared to subcutaneous fat. Too much of visceral fat in your abdomen has been associated with increased risk of having high blood pressure, type 2 diabetes, heart disease, dementia, cancers, and many other health problems.

Those with high cortisol levels are seen to carry excess abdominal fat and may develop fat tissue around the neck and a fuller, round face. This imbalance is also seen to attribute to the high blood pressure or high blood sugar levels, known as hyperglycaemia. You can read more about why abdominal fat is so stubborn here.

How to balance your cortisol hormones

The most obvious way for you to balance your cortisol hormone levels is to reduce your stress and increase the amount and quality of sleep you get every night. According to Wake Forest University, five hours or less can cause a rise in cortisol increasing your visceral fat levels and causing skin problems. Other ideas to low your cortisol naturally include:

Sleep problems are huge and affect many, but getting an average of eight hours sleep a night appears to not only make you feel and function better, it makes you look better too!