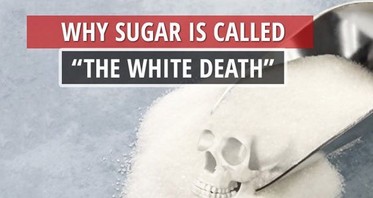 The notion that sugar can feed cancer cells is a pretty daunting one, particularly when our consumption of sugar in Western countries is at its all-time high.  But can it be that simple? If we ditched the granulated sweet stuff, would that reduce our risk of cancer altogether?

The growing concern about sugar’s effect on the body has been further heightened with the latest study to be published in Cancer Research.  According to the study conducted by The University of Texas MA Anderson Cancer Center high amounts of sugar may increase the risk of cancer, especially breast cancer.

Published in January 2016, the study found that mice with a comparable sucrose intake to the average Western diet had a much greater risk of tumour growth and metastasis versus mice consuming a non-starch sugar diet.

The mice, who were genetically modified for breast cancer research, were divided into four different groups each having a different diet with varying amounts of sugar.  They were fed this diet until they were about 6 months old.

After a period of six months, those mice with sugar levels similar to that of the average Western diet showed an increase in tumour growth and spread of lung cancer.  50 to 58 percent of the mice on a sucrose-enriched diet in the six months had developed mammary tumours.  Only 30 percent of the mice fed a non-sugar starch-based diet had developed any measurable tumours.

The research also revealed that the number of lung metastases were significantly higher in mice on a sucrose- or a fructose-enriched diet, when compared to the mice on a starch-control diet.

“We determined that it was specifically fructose, in table sugar and high-fructose corn syrup, ubiquitous within our food system, which was responsible for facilitating lung metastasis and 12-HETE production in breast tumours” says study co-author Lorenzo Cohen, Ph.D., professor of Palliative, Rehabilitation, and Integrative Medicine. 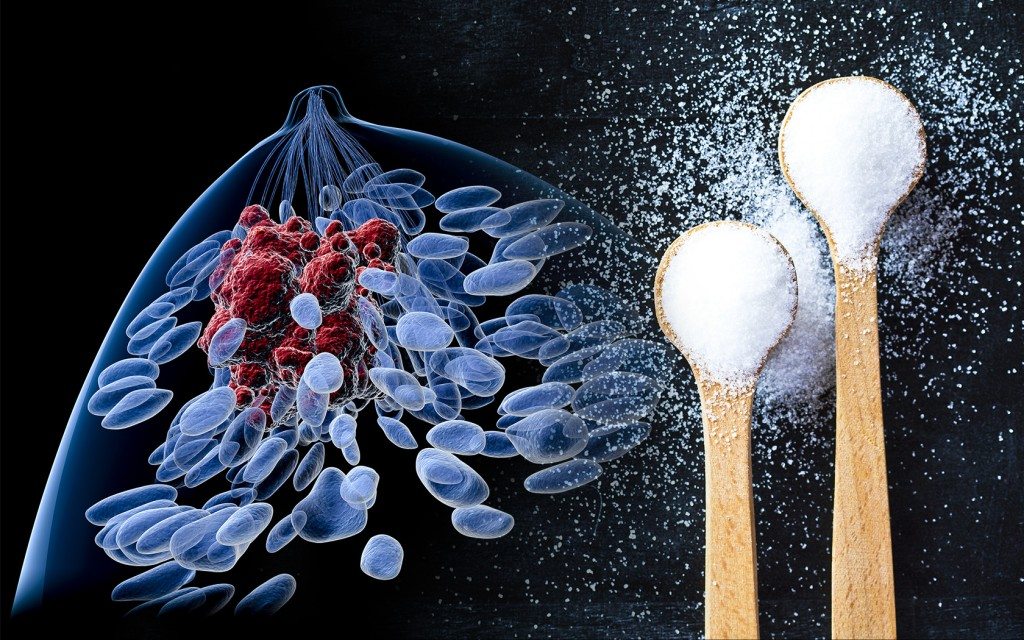 Essentially the researchers suggest consumption of sugar affects the inflammatory pathways which fuel cancer growth.  This occurs as sugar increases the growth of a fatty acid called 12-HETE in breast cancer cells and an enzyme known as 12-LOX.

Table sugar (sucrose) is composed of two sugars: fructose and glucose. “Fructose is processed more by the liver, glucose by the pancreas and other organs,” says Cohen.

When the mice received more fructose, their tumours grew larger and at a much faster rate. Fructose was found to increase the production of 12-HETE in breast tumours and the spread of cancer in lungs.

Sugar feeds every cell in your body

All cells in our bodies require sugar.  It’s vital for the functioning of the brain that the body develops several strategies to maintain healthy blood sugar levels.  So if you’re not consuming carbohydrates in your diet, your body will produce sugar from other dietary sources like protein and fat.

When our cells feed on carbohydrate they’re broken down in the intestines into what is known as simple sugars.  During this process, the sugars are absorbed into your bloodstream and your blood sugar levels increase.

In response to rising blood sugar levels, the pancreas releases insulin (a chemical referred to as a hormone).  Insulin travels via the bloodstream performing several important tasks along the way.  One of the main responsibilities of insulin is to signal glucose to enter the cells.  Insulin does this by binding to a particular receptor located on the cell membrane and through several steps, allows sugar to enter the cell where it is used for energy.

Another one of insulins important jobs is increasing storage of calories as fat.  In the case when our insulin levels are high, the hormone signals to our body that we’ve got plenty of food and the excess calories should be used for the growth of reserves in times when we may need to draw upon them, like a famine.

We know that by consuming a lot of simple carbohydrates like table sugar, honey, jams, soft drinks and sweets all at once, our insulin level is going to rise relatively quickly.  But as a natural rebound effect, our blood sugar levels end up rapidly falling.

Low blood sugar levels trigger our body into thinking that it is low on fuel and as a result, our appetite increases to encourage us to bring our blood sugar levels back up to a healthy level.  During this process, people are probably a little irritable, hungry and more likely to overeat.

This vicious cycle of spiking and dropping blood sugar and insulin levels wreaks havoc on our bodies.  Our pancreas becomes exhausted as it can’t keep up with the body’s demand for extra insulin.   This can trigger insulin resistance where the body transitions to type 2 diabetes.

While the latest study by The University of Texas MA Anderson Cancer Center does suggest dietary sugar plays a role in the occurrence of cancer, there are many questions which still remain unanswered.  There have been, however, strong associations between cancer and sugar that can’t be ignored.

Cancer cells utilise receptors called insulin growth factors to spread the disease throughout the body.  Excess sugar consumed heads to the liver where it is metabolised.  When the liver is overloaded with sugar, it is metabolised into fat.  This causes a build-up of fat around the tummy area and the increased production of cytokines, which results in an increased risk of cancer.

Is the solution to ending cancer simply to ditch sugar all together?

Cohen says sugar, like oxygen, is vital to our existence.

“We need glucose. We need sugar. It is an energy source and we need it to live,” he said. “We refine sugar that extracted from its source and consume in extremely high quantities.”

Too much though and sugar becomes toxic.

There are also different sources of sugar.  Fruit, for example, is a natural source of fructose, but unlike many of our refined sugar products, the fructose is mixed with nutrients and fibre.  The latest study doesn’t extend into analysing whether this affects the growth and occurrence of tumours.

The single largest source of sugar in the Western diet is sweetened soft drink.  Beverages like Coke, Sprite and Fanta provide only sugar and no other beneficial nutrients.

The World Health Organisation advises sugar consumption needs to drastically reduce and people should be getting no more than 5 percent of calories from sugar.  That’s about 9 teaspoons per day for men and 6 teaspoons a day for women.

A standard can of soft drink contains 10 teaspoons of sugar.

Besides the increased risk of cancer, sugar consumption has been proven to fuel obesity, diabetes, heart disease and even Alzheimer’s disease.

The lowest dose of sugar fed to mice in the animal study conducted by Cohen’s research team was the current recommendations of 6 teaspoons per day.  Shockingly, even at that intake, the sugar fed the tumour growth.

So you decide, is drinking a can of soft drink a day really worth it?