A brief guide to all types of body fats 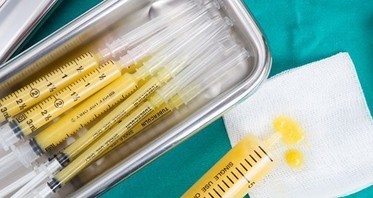 No matter how slim you are, we all have body fat distributed throughout the body. Adipose tissue is an organ of our body and plays a vital role in determining our health. Like the fat in our food, some types of body fat are better than others, and too much adipose tissue can have a detrimental effect on our health.

The function of fat cells

As an organ, fat in the body has various roles which affect our overall physiology. Fat helps insulate us against temperature extremes and when your body utilises it, fat is a reliable energy source. Fat forms cell membranes and creates compounds such as vitamin D, hormones and bile.

Fat is vital for the absorption and storage of some key nutrients. Without an adequate intake of fat, fat soluble vitamins A, D, E and K won’t be able to function.

While the ideal amount of body fat varies from person to person, what we do know is having too much or too little body fat can cause significant health issues.

The types of fat in your body

Adipose tissue is made up of fat cells or adipocytes that are distributed around the body depending on the individual. There are several types of fat:

This form of fat is what you feel when you pinch your love handles or squeeze your belly fat. It’s located just under the skin, makes up nearly 80 percent of all body fat and is generally considered less harmful than other types of deeper fat.

Visceral fat surrounds your internal organs inside the abdominal cavity. Increased visceral fat can be detrimental to your health. Unlike subcutaneous fat, visceral fat secretes large quantities of the pro-inflammatory cytokine interleukin 6 (IL-6).

IL-6 is implicated in a whole list of chronic diseases including diabetes mellitus, with researchers believing the pro-inflammatory cytokine main be the leading cause of insulin resistance. The presence of visceral fat also drives your risk of heart disease, stroke and dementia.

The fat inside the liver is known as intrahepatic fat. Obesity and aging increases intrahepatic fat accumulation, which can lead to non-alcoholic fatty liver disease and metabolic complications including insulin resistance, diabetes and coronary heart disease.

The visceral fat deposits surrounding your heart is known as epicardial fat. It can potentially cause inflammation and has a direct effect on heart function and coronary atherosclerosis. Epicardial fat is associated with serious health problems including obesity, diabetes and hypertension. These visceral fat deposits are also implicated in the presence of coronary artery disease.

Gluteofemoral fat is body fat distributed around your hips, thighs and bottom, and is typical of a pear-shaped body type. Unlike fat around the abdomen, fat in the lower part of the body may be protective against heart disease and diabetes. This type of fat accumulates over time and is much harder to break down than the fat deposits in your upper body. When broken down there are much fewer pro-inflammatory cytokines released compared with visceral fat which is why carrying gluteofermoral fat is less detrimental to your health.

These fat deposits are those between and within the muscles, found beneath the muscle fascia. It’s a good predictor of decreased muscle function and mobility, particularly in older adults. It’s also implicated in a variety of conditions including stroke, insulin resistance and diabetes. Injury to the muscles, obesity, age, inactivity and disease are all factors that increase the levels of intermuscular fat.

Brown fat is considered more like muscle than fat, because when activated it burns fat. Recent studies have found that lean people have higher levels of brown fat than those who are overweight or obese. Children also have more brown fat to help protect them from the cold. In adults, the brown fat is more active in the colder months to assist with temperature regulation.

Fat is disturbed differently between genders and populations

Where your fat is distributed around the body could actually be more critical than the total amount of fat you’re carrying. For example, central obesity is associated with a greater risk of heart disease, stroke, hypertension, diabetes, gall stones and even some types of cancers. In fact, overweight people with no abdominal fat are suspected to have less health complications than those who do carry fat around their mid-section.

Your gender can greatly depict where you’re more likely to carry excess body fat and your disease risk. Upper-body fat is more common in men, which increases their risk of heart disease, stroke, diabetes, hypertension and some cancers.

Women on the other hand, are more likely to carry their fat in the lower body which is generally not associated with chronic diseases. To a lesser extent than men, women post-menopause often begin to store the fat around their waist and abdomen due to a reduction in oestrogen.

Fat is also distributed around the body in different populations. Japanese men for example, carry more body fat for a given BMI than white Australians. Australian Aboriginal women have a greater waist circumference when compared to Australian of European descent.

The harmful effects of inflammation and fat tissue

Chronic inflammation contributes to a whole host of chronic diseases. Inflammation of fat tissue is implicated in the development of metabolic syndrome problems including type 2 diabetes.

Adipose tissue secretes proteins, known as adipokines, that help regulate your energy balance as well as other body functions. In the event adipose tissue is allowed to accumulate, especially around the abdomen, genes are activated creating adipokines involved in inflammation and insulin resistance. Elevated blood lipids due to a high-fat diet or obesity also promotes inflammation.

Inflammation is also driven by an increase in the number of immune cells located in the adipose tissue. Scientists have found that high calorie diets cause fat cells to make a group of proteins called major histocompatibility complex II (MHCII). These proteins are usually activated to support the immune system fight off pathogenic viruses and bacteria. In overweight people, adipocytes generate false distress signals which activates the immune cells causing inflammation.

The occurrences of this inflammation starts with an excess of nutrients entering the bloodstream. These are converted and stored as fat and stimulates the secretion of leptin. As the person continues to consume a high calorie diet, leptin levels increase and cause nearby CD4 T cells to become excited. This eventually leads to the proteins producing MHCII, resulting in inflammation.

Essentially this is an uncontrolled immune response to the modern day, high calorie diet and is likely to have severe long-term consequences for people who are overweight or obese.

All these factors explain why chronic inflammation is associated with obesity and an excess of adipose tissue contributes to metabolic syndrome and leads to chronic diseases. As you would expect, weight loss will see a reduction in the number of immune cells located in the adipose tissue, will lead to hormone regulation, and will alter the gene expression which will result in an improved inflammatory status long term.